Making a sandwich is probably the easiest type of cooking you can do, in some ways. Just slap whatever sounds tasty on some bread and eat it, right? But making hot sandwiches can be a pain, for a variety of reasons; mostly that properly toasting both sides of the bread can be difficult without spilling your sandwich. Enter: the sandwich maker, which encloses your sandwich between two sheets of metal and cooks it to perfection.

That’s just the basics though. In practice, figuring out what kind of sandwich maker you actually need is a bit more complicated, so let’s run through some important factors.

Here are the best sandwich makers you can buy: 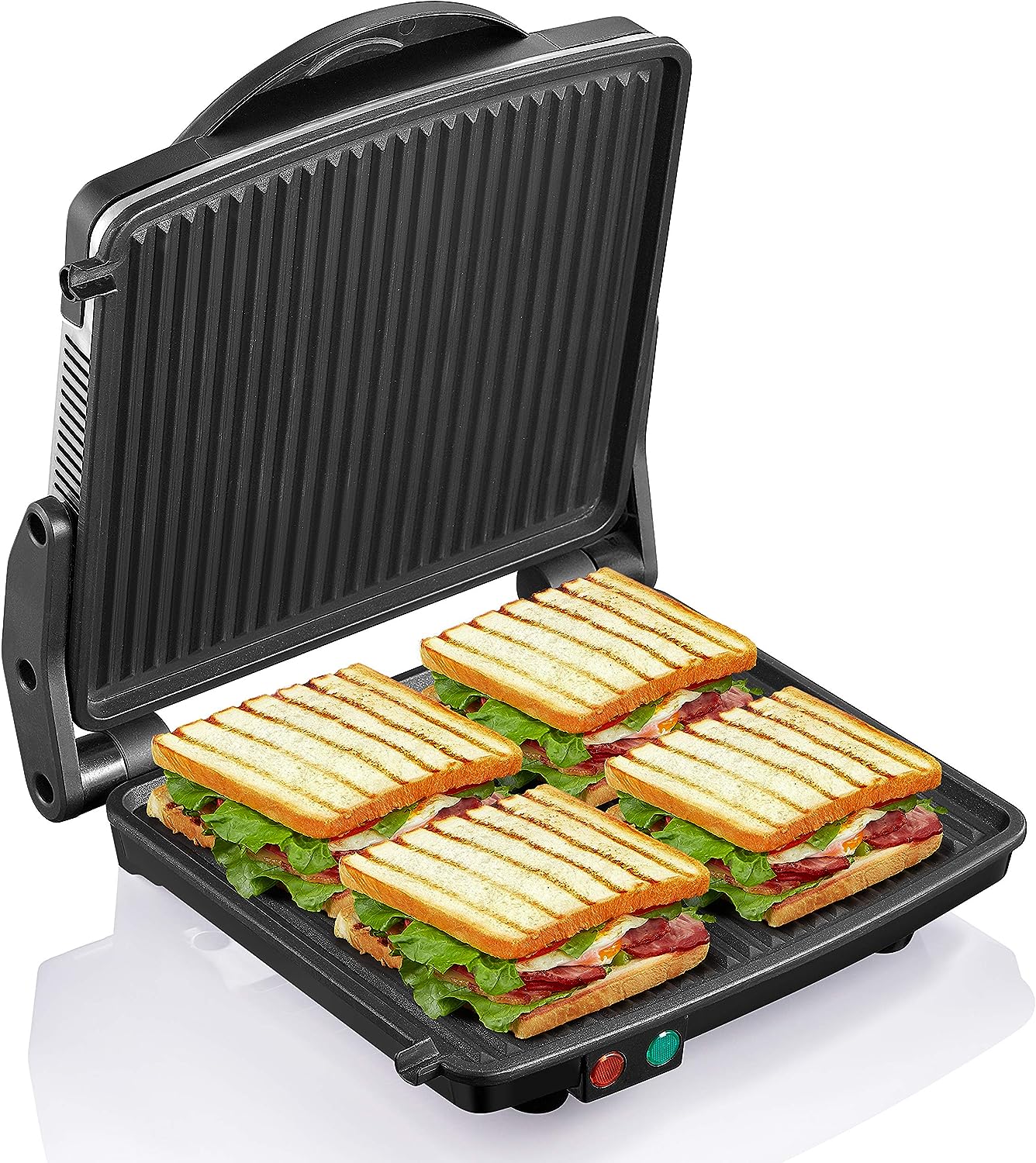 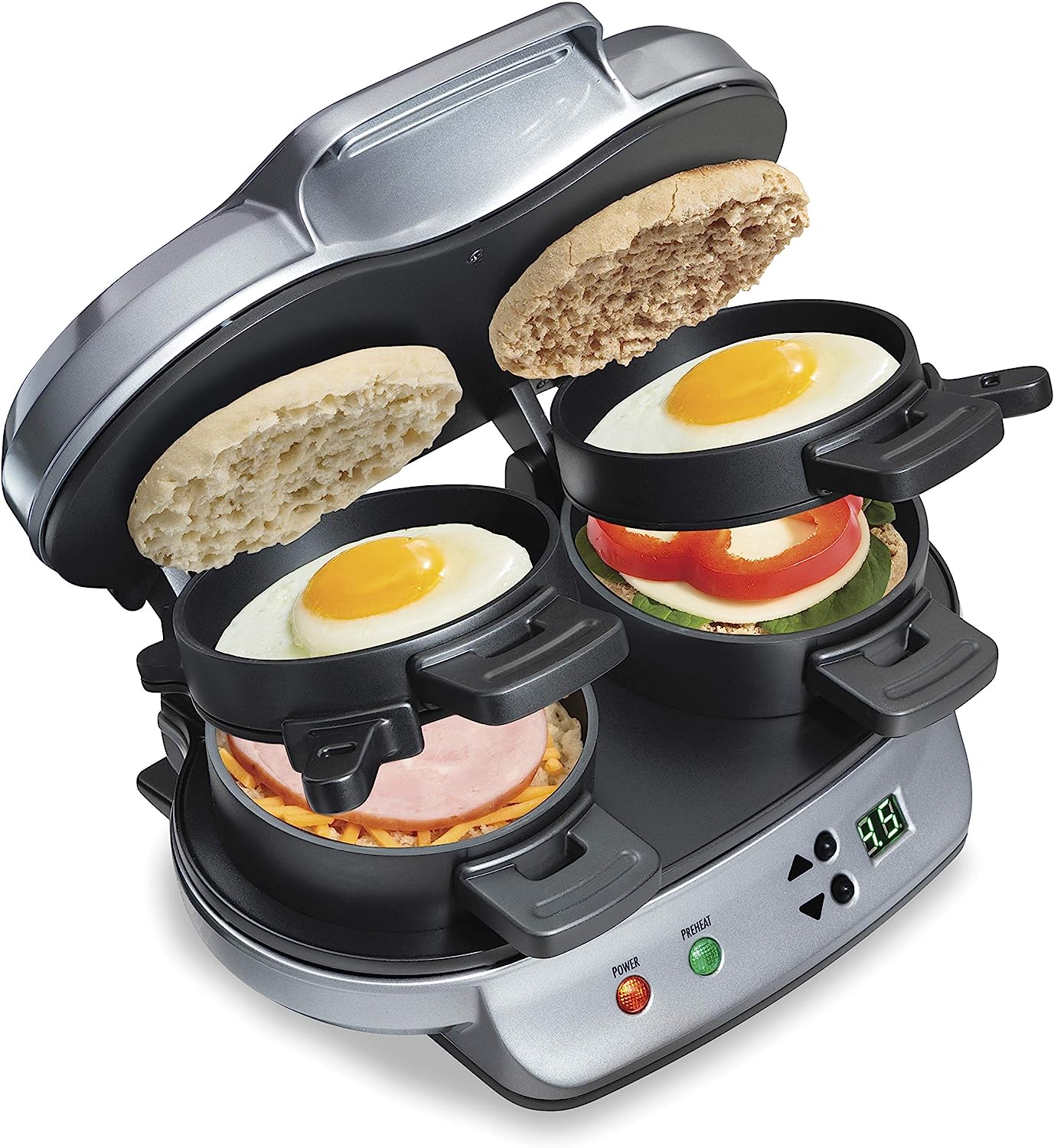 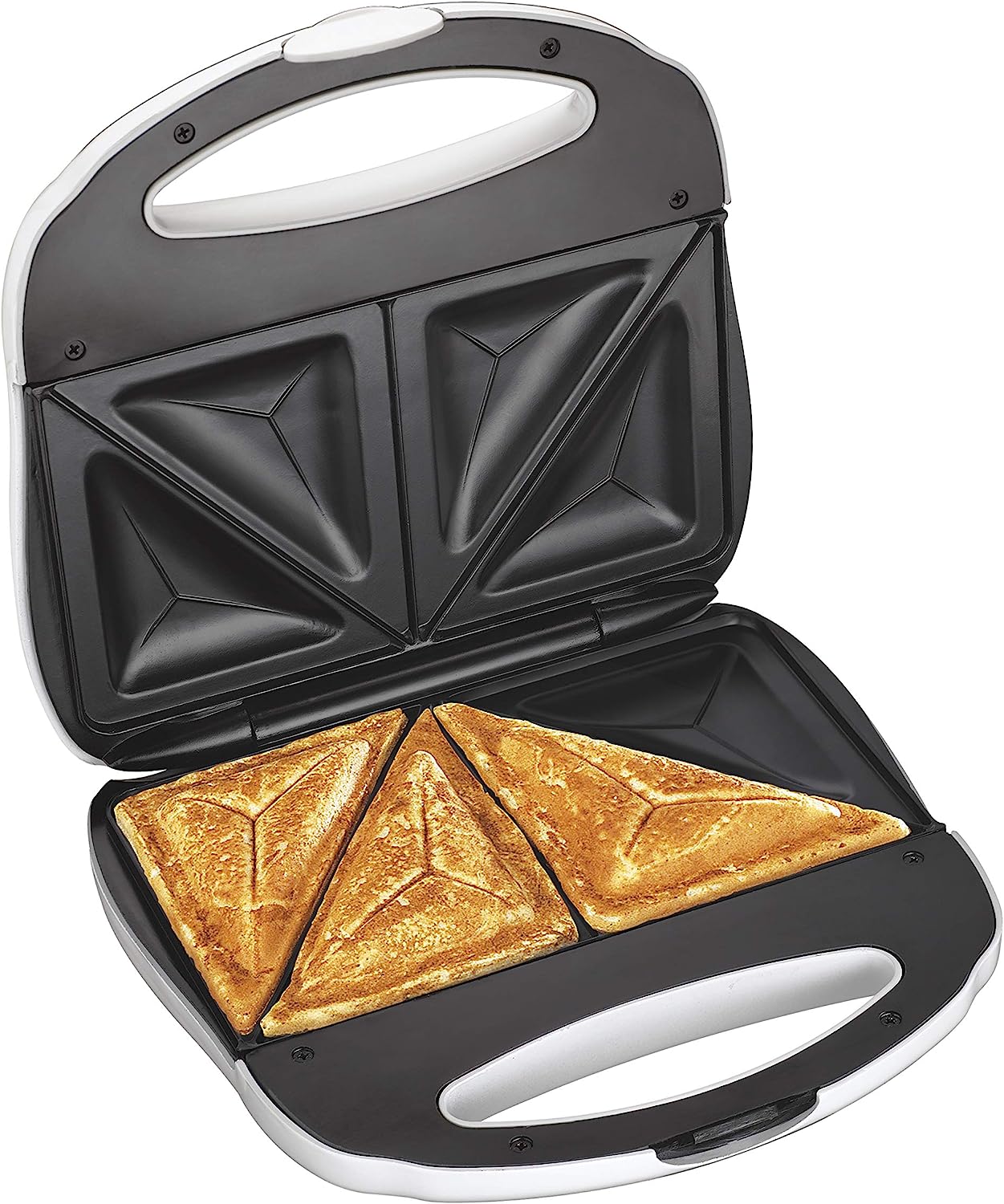 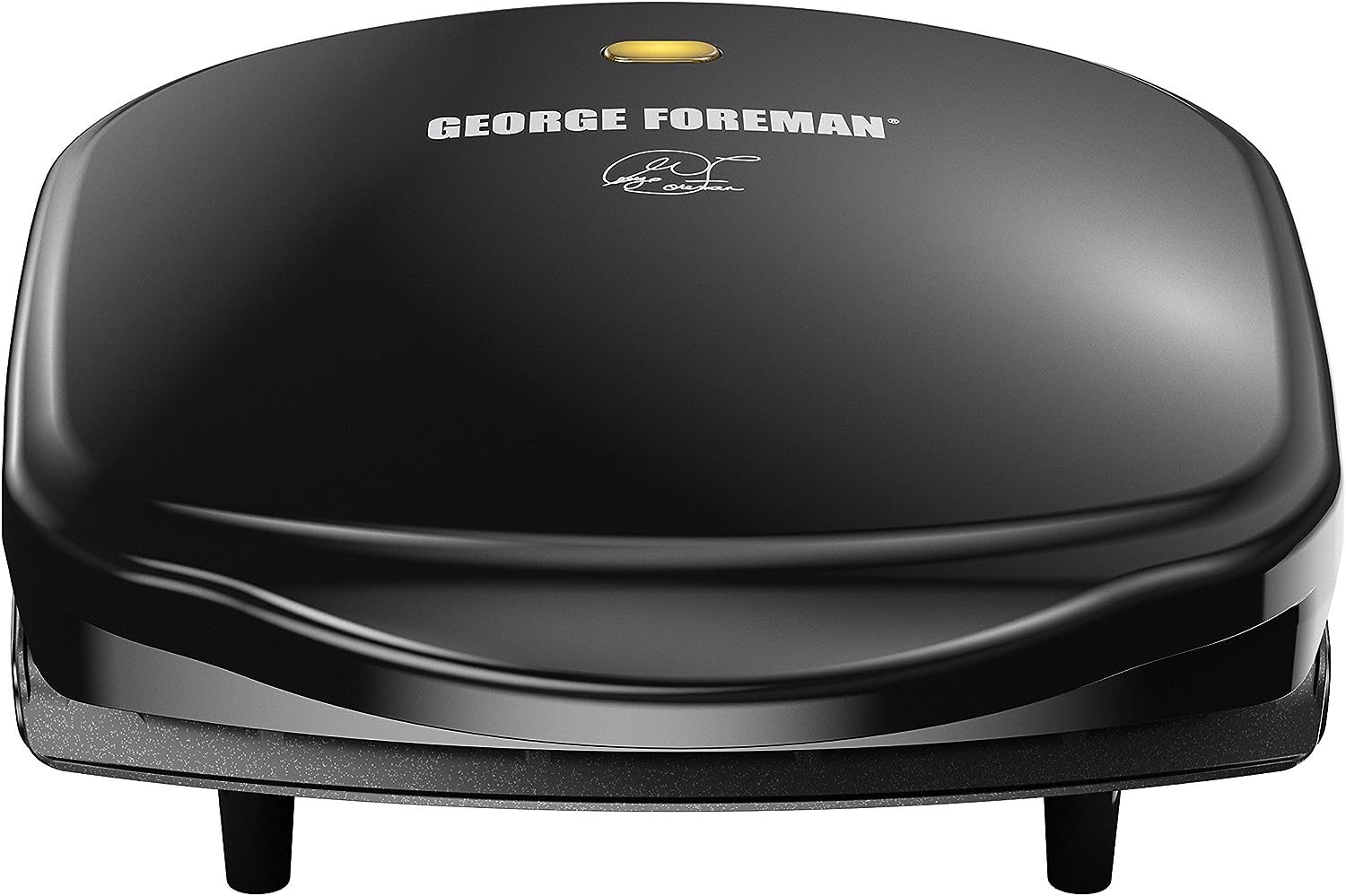 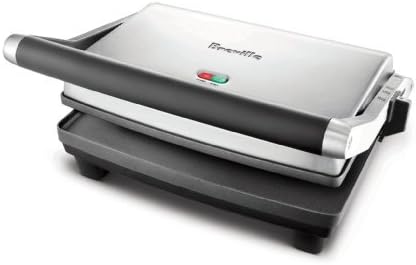 The Best Sandwich Makers You Can Buy

The design of this one is simple, but that’s what makes it pretty much the perfect sandwich maker.

The area here is huge, enough for 4 sandwiches (as pictured) of fairly normal size, or two sandwiches that are a bit bigger (like subs) to be pressed at a time; for a different metric, this is a whopping 108 square inches of cooking space, about half the size of your usual griddle.

The construction is pretty good here. Aluminum with a nonstick coating ensures your sandwich maker is easy to use and cleaning, as well as heating up extremely fast with its 1200 watts of power.

The operation is simple, with it just needing to be plugged in to heat up. This is only really a problem if you have very specific heating needs, which should not be the case with most sandwich type foods.

All in all, a great option to try. It even doubles as a griddle or tabletop grill in a pinch, though certainly is not perfect for those purposes. Still, you get double the space if you use it that way with the way the lid can lay down flat, and it’s always nice to have a versatile appliance rather than a one trick option.

Doubles as an indoor grill or ridged griddle in a pinch.

Well made and sturdy.

Great price for the quality.

No choice of heating options; not even an on and off switch. This one may be a bit constrained in what it can do, but what it does is really great.

The way it works is pretty elegant, and I quite like the different compartments at play that allow each “stage” of the sandwich to cook separately and then easily slip onto the part lower. Particularly, the egg cooks in its own little compartment and then with a quick pull, slots into the bottom bun and whatever else you may have decided to pile up on there.

The timer is nice to have, and typically the sandwich maker will perfectly cook anything in under 5 minutes; great for when you’re in a hurry.

The machine itself is affordable and compact; great for tucking away in a cabinet or corner when not in use. My only problem with it is that it is a dedicated BREAKFAST sandwich maker, limiting its utility quite a bit. Still, the design is great and as a result more than earns this sandwich maker a place on this list.

Excellent price for the quality.

Small compartments only, so can’t make larger sandwiches like paninis. This Proctor Silex Sandwich Maker is likely what most people think of when they hear the word “sandwich maker”. While this is by far not my favorite sandwich maker design for a few reasons, I do have to say it excels at one thing: this is a lean, mean, grilled cheese making machine.

The way the clamshell is designed to close over, cut, and seal the bread at the edges is great. I love this thing for making all sorts of hot, melty sandwiches, like the aforementioned grilled cheese, a hot ham and cheese, or something along those lines.

However, you can sort of see the problem with this. If you want to make anything that’s not a grilled cheese or grilled cheese adjacent sandwich, you’re out of luck. It simply doesn’t work to make a club, or a panini, or even most breakfast sandwiches (though it can make a gloriously eggy triangle that’s worth trying).

Still, if you don’t care about that, this is a great choice. It works fast and it’s well made, as well as being exceptionally easy to clean. And operation couldn’t be simpler.

If you’re fine with what basically amounts to a quesadilla maker for triangle shaped sandwiches instead this is the perfect choice for you; it makes some very fine sandwiches, if a bit limited in the variety.

Easy to use operation.

Compact, lightweight, and easy to store or transport.

Very limited in the varieties of sandwich it can make. As I mentioned before, there’s something to be said for versatility, and this option has that.

While not the bets sandwich maker around, it can get the job done on making some very nice paninis with ease.

However, its greatest strength lies in that it’s a fully functional George Foreman grill, with all that entails. Even after all this time, these are some of the better indoor grill options available, and they can make a lot of foods you otherwise wouldn’t be able to with a sandwich maker.

However, even looking at its raw sandwich making capacity, it does have a few tricks up its sleeve. As an a example, making a grilled chicken sandwich might normally require two pans; one to grill the chicken, and then another (or your sandwich maker) to do the final prep.

But this grill can cook the chicken on its own, quickly and easily, with very little fuss.

Essentially while I think this is a somewhat average sandwich maker on paper…in practice it can bring a lot to the table if you’re even a little bit creative with it.

Easy to use for a variety of purposes, from sandwich making to grilling.

Good price for the quality.

Purely as a sandwich maker it is fairly lackluster due to its small size and lack of ability to make non-pressed sandwiches. Breville makes pretty solid products, and in many ways this is no exception. It is a quite high powered panini press, with huge power (1500 wats) and very fast heating, along with an easy to use and lift handle and overall solid design.

The interior space is good, and I like that the bottom is flat, giving a little more room to squish the sandwich as needed.

This is a great sandwich maker, but it’s a bit hard to justify the price; this costs about double our winner, or any other option on here, and it’s only slightly better, if at all. It’s decent as a grill, good as a sandwich maker…but I simply cannot see myself paying quite this much for it.

However, it makes its way onto this list largely because its raw quality is so high. On a sale or later price drop this could be a perfect choice.

Plenty of interior space (good for 2 paninis or 4 regular sandwiches).

Ridged only on the top, for a more stable bottom surface.

A bit too pricey for what it really brings to the table.

Choosing the best sandwich maker outright is a bit difficult, as it partially comes down to preference. Sandwich makers are naturally a bit specialized, and each is suited for a different task, so it’s largely going to come down to what kind of sandwiches you want to make, as mentioned above.

However, even with that in mind, I think the safest bet here is the Yabano model, which is simply more versatile and higher performance than most. If you could get the Breville option on sale it would top the list, but as it is I can’t wholeheartedly recommend it, particularly as it can’t be used as a proper grill or griddle, unlike the Yabano.

The others fill more niche roles, but could be great if you like the niche they fill; the Hamilton Beach breakfast sandwich maker is my particular favorite of this bunch.

What Should I Look for in a Sandwich Maker?

There are a few objective quality factors, but they’re pretty much all the same. The interior should be aluminum with a nonstick coating, and should be spacious; how spacious depends on what kind of sandwich maker it is again.

So think: what kinds of sandwiches do you want to make? That will determine what you should get.

By far the most versatile (and second most common) sandwich maker is the panini press. These have much larger interiors on average compared to other sandwich makers, and can do a lot. You can fit pretty much any sandwich in there (and multiple of them) and make sure they’re pressed and toasted properly.

This is likely to be what most people are looking for when they go out to buy a sandwich maker, but interestingly enough it’s not the most common option.

This would be the sandwich makers that are literally billed as such, though are what I call “grilled cheese makers’ because that’s pretty much what they’re good for. They have a number of triangles on the interior, and are designed to press, cut, and seal normal sized bread slices with whatever filling you put in there. As you might imagine, this mostly constitutes easily melted cheeses, and things that go well with such. These aren’t very versatile, but they’re nice to have.

The third major type would be the breakfast sandwich maker. These double as sort of an egg cooker, and have very small, distinct area to put your sandwich bread; which is generally going to be an English muffin or a very small bagel, unless you plan to cut regular sandwich bread into small circles, which isn’t necessarily a bad idea, but can be a bit wasteful.

There are other types of sandwich maker that can make delicious finger foods, but they’re generally either not worth mentioning, or are just different appliances with sandwich press capability (which we’ll get to).

In any of the above cases, you’re looking at paying somewhere between $30 and $40 on average, and I wouldn’t suggest paying more than that under most circumstances.